Home / Made by me / Tutorials / Video I finally finished my new sewing corner and my custom built cutting table. Seriously it was a lot of work and by the end of it I was beginning to experience stress related symptoms, probably because all I did was work at my day job and working on the remodeling every “free” minute. That is the reality behind many of the Pinterest friendly images I’m sure, at least that was my experience. So here goes.

First a little back story

My children has shared a big room, and in that room three different small “rooms” were created using  DIY dividers. One room for each kid and then a mutual computer corner. When my eldest moved out, the younger understandably wanted to get the space for herself , but as both me and my husband also wanted more space, so we came up with a solution that would give all three of us that. It meant moving out all my fabric storage from the bedroom and so that my husband could use that space, and instead I was able to use the kid’s computer corner and turn that into a working and storage space.

I had seen this Ikea hackers tutorial by Karen Ackva with Expedit/Kallax shelves made into a cutting table tutorial floating around on various social media, and wanted to make something similar as I need all the extra storage I can get. So I knew it would be worth the extra work compared to just buying a table.

But let’s start with the before picture shall we? Here is the corner before it was turned into a work space. As you can the remodeling of Anja’s room is already on it’s way, hence the scraps. Since both me and Anja needed new furniture we rented a van and went to Ikea. Here is me feeling excited before we began shopping. And this is four hours later, when we finally had bought all we needed and packed it into the van. We live 3 floors up with narrow spiral stairs and no elevator and scarce parking opportunities outside. So I knew that the rest of the day would be kinda nightmarish trying to carry it all up to the apartment. And it was. The next day I was still exhausted but we spent the entire day building Ikea furniture, including three Ikea Expedit/Kallax shelves that would be the foundation for my new cutting table and a wardrobe for all my fabrics and some of my me-made clothes. At least we have an electric screwdriver, but I was still aching everywhere when the day was over. Two days later I headed to Ikea again because I had forgot to buy some stuff to the wardrobe that I was also building. Everything is sold separate in Ikea so you really have to be focused when buying stuff there. I also went to the hardware store and bought a big pine slab for the table and a masonite/pressed board to use underneath the shelves. I stained the pine board to make it look like darker wood. Sweden is pine country (70% of Sweden consists of wood, mostly fir) so it feels unnecessary and expensive to buy some fancy and perhaps foreign wood when we have so much locally produced fir. Then it was time to put it all together. Here I discovered two things that wasn’t great. First the width of one shelf is less than the short sides of two shelves. So there was a pretty big gap. And secondly the size of the pressed board was too big (I used the measurements in the tutorial). Either they measured it wrong in the store or Ikea has changed the sizing of the shelves (or the numbers in the tutorial could be wrong, but I doubt that). Anyways, if you try this at home – don’t saw/custom order the board until you have assembled the shelves and can double check the measurements. I added seven wheels (also from Ikea) This is also how the board is attached to the shelves. Then I flipped the table over to add the cutting board to the shelves. Voilà, the finished cutting table. All in all it was worth the work and I knew that even when it felt painful, so that helped me get through it.

P.S. Once I also built a headboard for our bed, here is a tutorial on how I did that (much easier than the cutting table). Sew a Knit Hat Beanie from a Recycled Sweater 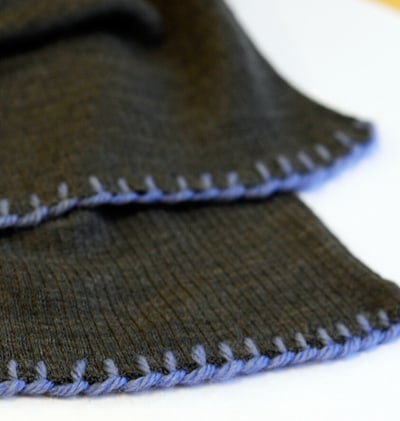