As many of you already know, I’ve been at crossroads this year when it comes to running The Last Stitch while also maintaining a full-time day job. I’ve begun to feel really exhausted trying to keep up with it all, which I think is a combination of working essentially two jobs for five years, combined with all the stressors that the pandemic has brought us this year.

But saying goodbye to a steady pay-check is incredibly scary and a decision I didn’t feel ready to take. On the other hand, getting a steady salary is not something we can take for granted either.

Which is what happened to me.

Since this summer I’ve known that there would be some changes at my day-job. So on top of the pandemic and me working myself into a burnout, I’ve also lived with this uncertainty for a good chunk of the year.

Then all of a sudden, in December, there was a development that threw my life into a completely new direction.

So to make a long story short, starting February 2021, and due to redundancy, I will no longer have a day-job.

So I’m suddenly facing my biggest career pivot ever, and that in 2021 I will be able to focus 100% on The Last Stitch, trying to make it financially viable, i.e. having it fully replace a day-job income.

It’s a development that conjures some mixed emotions for me. I really liked my day-job and I was grateful for the financial security that it offered me. I also prefer having an office to go to and colleagues around me, rather than working from home, by myself (even though that’s not been a reality for much of 2020).

But I was also super worn out since my growing sewing business takes up A LOT of time and mental energy. And that sooner or later this combo would not be sustainable anymore.

Before I got the severance package I was looking into ways to scale back my business in 2021 while still maintaining some of the momentum that I’ve built up for the last four years.

But it was very tricky to figure out a solution.

I’m a hard worker, that places a lot of self-value in regards to my productivity. So I knew that I would keep putting my all into both jobs since that’s just my personality. Also, the business is now at a scale where you can’t really step back that much since there is so much maintenance needed in order to just keep it going.

That painful realisation led me to have twinges of panic about how my 2021 would be like, even crying when I shared my worries on how it would affect my mental health if I kept working this much.

That’s not a great way to feel about a year that hasn’t even happened yet.

So even though this new road is paved with uncertainties I ultimately think that getting the severance package was a blessing. I might still get a new day-job eventually, but ideally, I would want it to be part-time and less demanding. We’ll see. Another option is to go back to freelance writing and design. I’ve done a couple of those projects this year, and it’s something I really enjoy.

So what’s in the pipeline for The Last Stitch? In 2021 I plan to release 2 garment sewing patterns and some other, smaller things too. I will also start working on my next sewing book, that will hopefully be out in 2022.

But even though I have a financial deadline looming, I will try to not kill myself trying to make heaps of money in a short time. As I said above, I will keep my eyes open for part-time jobs and freelance gigs, and supplement my income that way. But I’ll rather be super frugal then do two full-time jobs again, at least that’s how I feel about things right now.

Not your usual success story

So this post kinda feels like a nice way to round up of all the things I shared with you during the last few years, about how I’ve grown my business while also maintaining a day-job.

I’ve been very keen on sharing this journey since you don’t see many stories like this one, i.e. the story about someone who after several years still wasn’t able to reach enough financial success to quit the day-job, but kept going anyway and did see constant progress, even though it was slow.

Instead, we mostly hear about people who were able to quit their day-job after a year or so, due to some quick successes. Which in reality is an anomaly and not the most common path.

And then there are the stories about seemingly successful people running business full-time, but if you would scrape the surface, many of those aren’t actually able to make a full-time salary from it. And if we don’t talk about that fact, it kinda distorts the picture of what entrepreneurship really entails.

So hopefully stories like mine can be helpful too, even though it’s not necessarily a conventional success story. 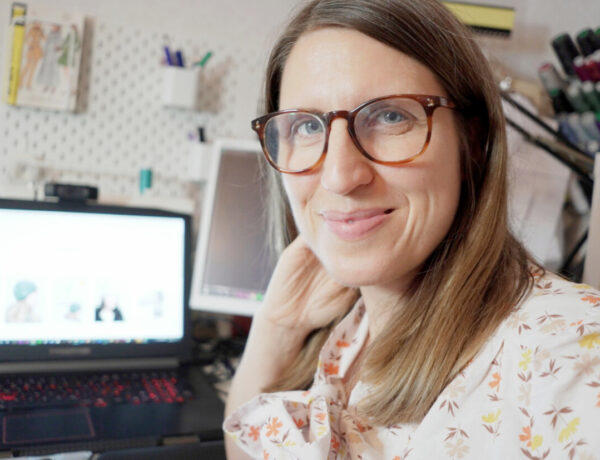 Taking a break from my day-job (again)

State of the Business Fall 2020

How to Sew a Protective Tubular Scarf (Buff)

How to Sew a Buff with a Serger Flatlock Seam

Keeping cosy in layers of cream and lace today. I

Wearing the bow-tie knit blouse I made yesterday.

What I'm working on right now. A bow-tie blouse ma

Here is a closer look at the Burdastyle jacket I s

One of my sewing obsessions is to make structured